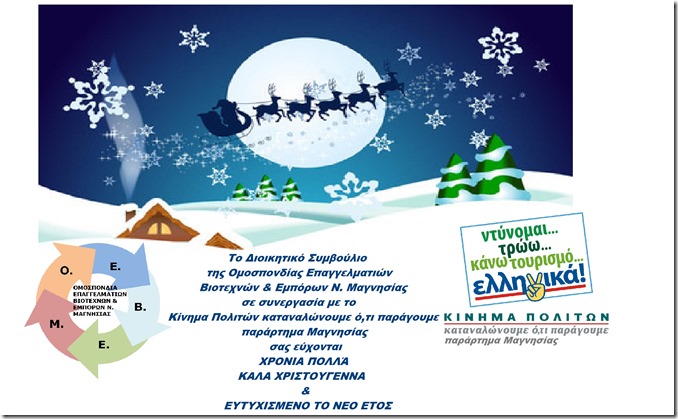 It is generally accepted that the application of capital constraints (capital controls) has formed a tight operation under all enterprises in the country (mikres- large eisagogikes- export), and has caused significant distortions in the financial transactions between enterprises, domestic and foreign, household and banks. Indeed, in an economy that cumulative GDP has fallen more than 27%, the cost for small businesses multiplier effect and cumulative negative effect on already compromised financial situation.

The IME- GSEBEE after extensive debate caused by members and organizations represented, gathered a set of reports of problems encountered by small businesses in the country, export and import in the period of capital constraints and submit proposals on the smooth functioning of the market recovery process and doing business with emphasis on appropriate adjustments to be made to the immediate period ahead.

Specifically, based on problems reported by small businesses as a consequence of the application of restrictions on capital movements listed below:

– It is clear that our member companies were unprepared for entering the new age transactions with plastic money as they were not familiar with the e-banking transaction system, and most of them do not have the necessary equipment (EFT / POS) for transactions with credit, debit and prepaid cards. The impact on turnover was particularly significant (mainly from uncertainty caused), as weighted average in July the decline in small business amounted to 48% (climate research IME-GSEBEE, July 2015). On the other hand, the commission rates for transactions through POS and card remain very high, higher than other EU countries (over 2.5% of turnover). The EU regulation already in force has positive aspects about the charge limits are set, but will be taken and the appropriate legislative initiatives by the state, and should be exercised and the corresponding supervisory review.

– The equation of a percentage commission rate for using credit, debit and prepaid card leads to inefficient economic choices for consumers and high costs for businesses. When you take into account the cost of purchase and maintenance of POS machines, coupled with the increased cost versa progressive purpose machinery for companies with smaller turnover, we realize that a small business is faced with a disproportionate size of the financial and administrative burden. This condition creates conditions for greater concentration and market oligopolisi.

– Many companies do not have access to supply terminals POS machines because of their inclusion in Tiresias. Restoring business in the banking system without the direct consequence of the seizure or the label of “bad payers” are for the benefit of the companies themselves and the economy. We should adopt the proposal for implementation of OEVEM unseizability account associated with terminal equipment and the tax authorities.

– On the consumer side, will the subscription cost and the interest rate should be significantly reduced using credit cards, and should eliminate any cost for using debit cards.

– Increased costs appear for transferring remittances between domestic banks. The amount of charges remains very high, despite the fact that companies that maintain accounts in Greece and internally distribute money effectively serve the objective of strengthening the domestic banking system. You have to minimize and eliminate the charges for account transactions within professional frameworks (paying suppliers, transfer to same person account) but the service needs of households (bill payments, taxes, utilities and others).

– Deterioration of red business loan index (107 billion according to recent data published by the elaboration of tests stress), as well as reduced turnovers and deferred receivables from customers / suppliers (checks, payment delays) have reduced liquidity and the financial results of companies. The arrangement of red loans with modern tools of information and objective evaluation of the economic potential of debtors is important condition to restart the economy, depending of course upon successful completion of the recapitalization process. The creation of the Ethics Code is not sufficient to resolve the burning issue of red loans, while the versions that have seen the light of day remains bureaucratic and time consuming. In our previous reports to the Bank of Greece and the Greek Banks Association, submitted specific proposals from IMEGSEVEE concerning the need for publishing and analyzing statistical data on the structure of loans, the development of various forms of arrangements, the aggregate data of Tiresias, the link applications; loans, according to the reports issued by the European Central Bank.

– Distortions formed by the impossibility of partial or total repayment of loan obligations, because while the money remains frozen in accounts can not be used for repayments under the PNP.

– On the legislation that has been done on the issue of release of auctions, there should be an organized plan of specialization and individualization of each case of the banks, so the settings will be promoted to bring about mutual benefits to individuals (households and entrepreneurs) and businesses. The scenarios that have seen the light of day (elongation, rent, debt transfer to heirs, relocation) should be enriched with modern tools valuation of securities (current and future).

The criteria year income must cover net disposable income, while the criterion of asset must relate values ​​adapted to today’s reality are far from objective values.

– In particular, in cases not covered by the debtor by protecting primary residence (in business or mortgage loans), after exhaustion of any possibility of loan arrangement should auctioning the mortgaged asset or other objective value X, be accompanied by a full deletion of the requirement of the bank for all other assets. This will avoid moral hazard auctioning at low values ​​and degrading speculation in the property market.

– a perverse context management of overdue checks has been created as the one there are businesses that do not have to pay, and other winning liquidity and lead other sectors to suffocation. The law extended the maturities request conflicts with the law of demand rapid adjustment of debts, because there is a risk of creating a vicious cycle defaults.

– Uncertainty about the possibility of seizure by the government and banks, funds are the Company account, and designed to meet the business needs. There should be a single recalcitrant corporate account, through which the financial obligations of enterprises will be served, with no possibility of freezing (when there is obviously illegal transactions). Indeed, the pervasive uncertainty creates incentives escape from the Greek banking system and opening accounts in other countries. The distortions caused by the lack or ensuring liquidity through such practices is obvious.

– The new setup promoted for the management of red daneion- not include SMEs and mortgages first residence; and the ability to purchase loan portfolios from exotrapezika funds, can provide liquidity to the banking system, however, but should be pursued mutual and beneficial solutions for borrowers who are unable to repay their loans. Specifically, the loans of small enterprises need to establish a framework linking repayments to the financial performance of the business, because in any other case the entrepreneur will have no incentive to safeguard sustainability.

– Also referred to as specialized problems such as insurance companies delay payments to their branches and business-related risks, insurance products (export) and damage restoration (workshops, diagnostic) on the pretext of lack of liquidity due to capital controls.

– Finally, an important role performed by the Banking Ombudsman, the upgrading of which and the promotion of the project will contribute to the restoration of trust between businesses, households and the financial sector. The development of a banking code is compatible with the need of consumers complete information on banking products.

The OEVEM invites supervisors to formulate a road map for restoring trust between the private sector, state supervisory authorities and financial sector, to provide short way to suffocating restrictions that have arisen in the economy, the application of capital controls.

The funding breakdown by prefecture program, beneficiary institutions, the necessary documents and terms of program implementation, defined in no. 60 258 / 25.07.2016 Circular OAED

Beneficiaries workers in enterprises employing up to 25 people, which are paid to all workers the employer’s contribution 0.45% to IKA for the year 2015 and have not made and will not make use of resources LAEK through the training program 0.45% for the year 2016.

The Board of Directors

to cut the New Year cake.

We would like at the outset to thank you for your prompt response to telephone contact we had with respect to the extension of current contributions to OAEE insured. This resulted in at least 15 people from the region of Magnesia not lose adjustment. After a discussion held by insured persons who would face the risk of eviction from the arrangement shows the following:

1. Many retirees parents unfortunately cover insurance fees of their children so that the insured in configuration to await the preparation of their parents in order to cover their debt.

2. There is a clear will of the insured in configuration to adhere to the end.

3. With this small extension the revenue of public funds will be maintained at least (it will not go outside people setting which await the preparation of their parents to maintain therein)

For these reasons, please extend a few days (up to 7 days) to become a permanent arrangement for the payment of current contributions to OAEE insured.

We are confident that fair and reasonable request will find our prompt response from the body, keeping in regulating all those members who want to keep in it and try in every way not to go outside. Our proposal is in the direction of preserving as many policyholders into the setting.

CIVIL MOVEMENT “consume what we produce”

On Wednesday, September 16, 2015 at 19:00 pm at VOLOS PALACE hotel, Associations of Professionals, Craftsmen and Merchants Pref., With the support of the Chamber of Magnesia, the Metropolis of Demetrias and the General Confederation of Professionals, Craftsmen and Merchants, activate the movement ” consume what we produce, “aimed at highlighting and strengthening local Magnesia products.

We support our jobs, our products, our future. 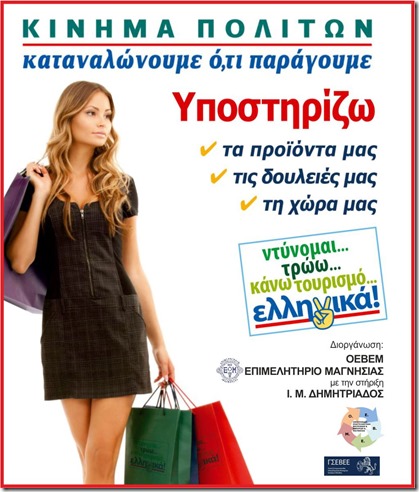 The FEDERATION OF PROFESSIONALS MANUFACTURES & TRADERS OF MAGNESIA announced that the Employment Agency announced a subsidized employee training programs to small businesses (GG 1169 / Issue B / 18.6.2015).

The funding breakdown by prefecture program, beneficiary institutions, the necessary documents and terms of program implementation, defined in no. 55119 / 08.07.2014 Circular OAED

Beneficiaries workers in enterprises employing up to 25 people, which are paid to all workers the employer’s contribution 0.45% to IKA for the year 2014 and have not made and will not make use of resources LAEK through the training program 0.45% for the year 2015.

Yesterday, Monday 08 June 2015 at 19:00 at the conference hall of the Paul Street OEVEM 43-45 Mela held with great success the conference of the Federation of Professionals, Craftsmen and Merchants Pref. On the new regulation arrears. However during the workshop developed and related issues such as tax clearance issuance conditions, the offsetting debts etc. Finally following questions – answers on all issues that concern all professionals, craftsmen, merchants of our county. The Federation wants to thank all the primary Clubs who supported this conference with their dynamic presence and the rapporteurs fully competent advice all the concerns of middle class professionals.

Speakers of the event were: